Ministry of Planning and Investment, British Embassy in Laos and GGGI release a Pre-feasibility Study on a Battery Swapping System for Electric 2-wheelers in Vientiane Capital, Lao PDR.

With support from the Ministry of Planning and Investment and the British Embassy in Laos, the pre-feasibility study conducted by GGGI examines the financial viability and environmental sustainability of implementing a Battery Swapping System model for electric two-wheelers in Vientiane Capital and contribute to achieve the Government of Lao PDR’s 2030 target on 30% electric vehicles penetration.

A Battery Swapping System, in simple terms, is replacing a discharged battery with a fully charged battery using a kiosk-based swapping structure which can house 6 to 10 batteries. The operation takes less than a minute and the system is getting increasingly popular globally as a way to accelerate the electrification to the 2-wheelers vehicle segment, by addressing some of the key challenges towards wider user adoption, namely range anxiety, long charging times, battery degradation, battery disposal, as well as high upfront costs, because e-scooters can be purchased without the battery. According to the study, due to competitive electricity prices in Laos, e-scooters are cheaper to operate for the user than petrol equivalent. Powering the transport sector with domestically produced electricity will also have a significant positive impact on the country’s trade deficit.

During the launch event which was co-chaired by H.E. Mrs. Phonevanh Outhavong, Vice Minister of Planning and Investment, British Ambassador Mr. John Pearson and Mr. Rowan Fraser, Country Director of GGGI agreed that the ultimate purpose of this study is to translate the 9th NSEDP, the National Green Growth Strategy, Paris Agreement – COP 26 and the Global Agenda 2030 into plans, activities and actions and they encouraged the private sector to fully utilize the detailed information from the study to develop alternative solutions to internal combustion engines motorbikes”. The study is available to download on GGGI’s website (www.gggi.org). 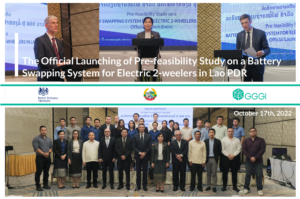 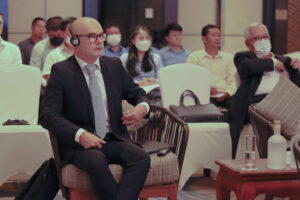 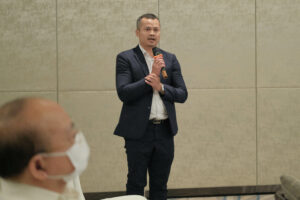 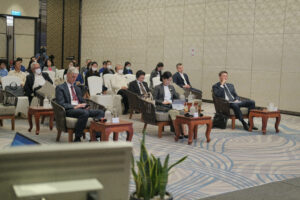 We use cookies on our website to give you the most relevant experience by remembering your preferences and repeat visits. By clicking “Accept All”, you consent to the use of ALL the cookies. However, you may visit "Cookie Settings" to provide a controlled consent.
Cookie SettingsAccept AllReject All
Manage consent

This website uses cookies to improve your experience while you navigate through the website. Out of these, the cookies that are categorized as necessary are stored on your browser as they are essential for the working of basic functionalities of the website. We also use third-party cookies that help us analyze and understand how you use this website. These cookies will be stored in your browser only with your consent. You also have the option to opt-out of these cookies. But opting out of some of these cookies may affect your browsing experience.
Necessary Always Enabled
Necessary cookies are absolutely essential for the website to function properly. These cookies ensure basic functionalities and security features of the website, anonymously.
Functional
Functional cookies help to perform certain functionalities like sharing the content of the website on social media platforms, collect feedbacks, and other third-party features.
Performance
Performance cookies are used to understand and analyze the key performance indexes of the website which helps in delivering a better user experience for the visitors.
Analytics
Analytical cookies are used to understand how visitors interact with the website. These cookies help provide information on metrics the number of visitors, bounce rate, traffic source, etc.
Advertisement
Advertisement cookies are used to provide visitors with relevant ads and marketing campaigns. These cookies track visitors across websites and collect information to provide customized ads.
Others
Other uncategorized cookies are those that are being analyzed and have not been classified into a category as yet.
SAVE & ACCEPT